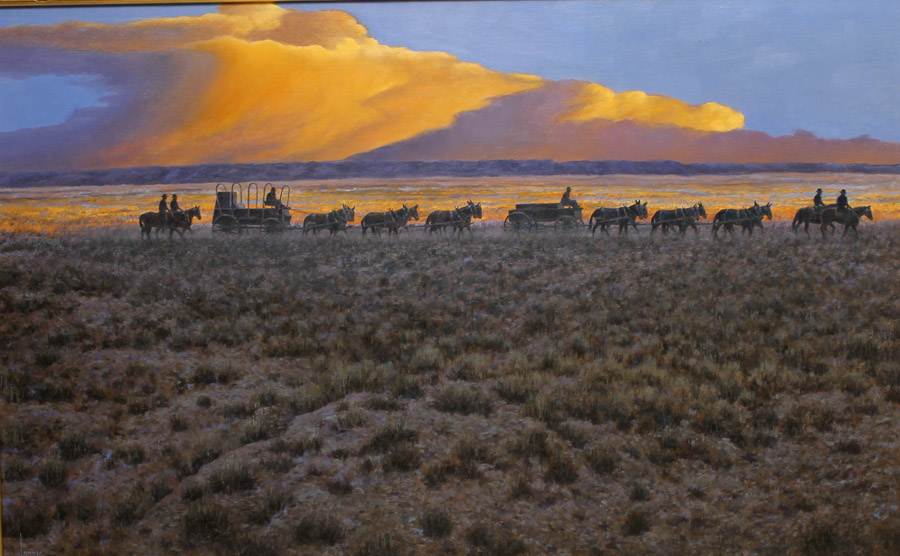 Oliver Loving died of complications from wounds sustained in a confrontation with Comanches.  Before he died Goodnight promised Loving he would take his body back to Texas.

In Feb 1868, Goodnight returned to Fort Sumner N.M. where he had Loving’s body exhumed for the return to Weatherford Texas.

A custom container was constructed from discarded oil cans soldered together. The casket was placed inside, then surrounded with powdered charcoal.  The tin container was then crated in lumber. Loving’s boy, William, joined the funeral cavalcade back to Texas.

Placement and mass of the funeral cavalcade was critical.  It needed to portray the emotion of sadness and the expanse of the country they traveled in.  Too much detail would have defeated the feeling.

I moved the procession to the right to give the illusion of movement.

The foreground Yucca was removed because it stopped the movement and distracted from the convoy.

An evening sunset was chosen to echo the feeling of the end of a day and a life.
The foreground was manipulated to bring the viewer back to the procession.