In 1878 Goodnight captured a bull Buffalo calf which was later named Old Sikes {Sykes}. This Buffalo became his breeding bull to help reestablish the Buffalo. Old Sikes had no respect for fences or gate. He would disappear for months harassing neighboring cattle and horses.

In the early spring of 1886, Charles decided to bring Old Sikes back to the ranch for good.  Grabbing his Mexican spurs, bull-whip he had plaited himself, and his fastest horse, he rode out to drive the troublesome Buffalo back to the JA Ranch.  Old Sikes had other ideas.  He charged Goodnight and chased him all the way back to the ranch.  Goodnight was running for his life. 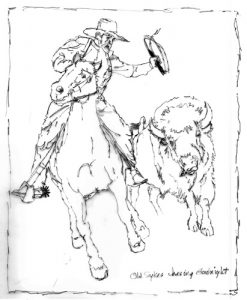 I made a few minor changes from the sketch.  I extended the horse’s front legs to show more of a perspective view.  I opened up and enlarged the Buffalo’s front legs.  I added some saliva to the mouth of the Buffalo.  I turned Goodnight’s head more to his left to draw more attention to the Buffalo. I kept the foreground and background simple to help the illusion of movement.